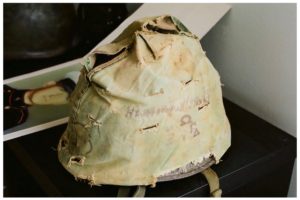 I just received a message from Brother Jim Brogan, Iota Omega ’60. His best friend and one of my best friends Bill Dutches, was KIA in Vietnam in 1966. He was recently contacted by a history buff in Canada who had acquired the helmet Bill was wearing when he gave his life for our country. Bill had decorated his helmet cover his Marine nickname “Snorkel” his girlfriend’s name (Betty Lu). And most importantly to our order: “Hawthorne New Jersey, Omega Gamma Delta.” Billy loved Omega and his Brothers. And – he was a Brother unto death, who never brought any shame upon our order through any act of his.