On the 45th anniversary of his death while serving his country in Vietnam, Brother Bill Dutches was honored by the renaming of Kingston Avenue in Hawthorne, NJ.

Honoring Bill were the Mayor, the State Senator for Hawthorne, and the American Legion color guard, honor guard, & Bugler. The Marine Corps honor guard also took part in the ceremony. Despite the fact that the event was held at 2:00 in the afternoon on a working day, 15 Omegamen were there to remember Brother Bill and honor his sacrifice.

Brother Jim Brogan, Bill’s closest friend, who flew in from Thailand to be there gave a moving speech about Bill, his life and his service. Brother George de Jager also spoke about his friendship with Bill that evolved from their relationship as brothers in Omega. Brother de Jager ended his talk by recalling several phrases the Omega Benediction:

“Be always ready to help a brother, let no shame come upon our order through any act of ours…… Bill never, ever brought any shame on our order, his family, or the Marines; and he certainly helped his brother marines by giving his life so that they might live.” 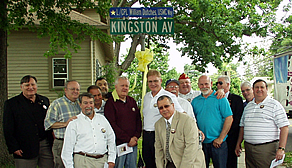 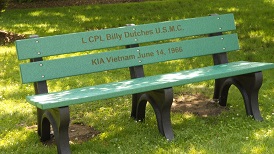