My name is Stephen J. Chiarello, I graduated from Valley Stream Central High School. I was a member of the Alpha Psi Chapter of Omega Gamma Delta Fraternity, Class of 62. I attended New York Institute of Technology, and Graduated in 1966 with a Bachelor of Science in Business Administration and I was employed by The Hearst Corporation, Hearst Magazines Division as an Internal Auditor for 37 years when I retired.
I was also a member of the U.S. MARINE CORPS and the U.S ARMY RESERVES and retired after 22 years of service, and served in the Persian Gulf War in1990-1991as a Sergeant First Class (E-7), and was a Platoon Sergeant in Operation Desert Storm in 1990-1991.
I have fond memories of being a proud Brother and member of Omega Gamma Delta Fraternity.
In 1960, as a sophomore in 1960, I wanted to receive a “BID” to Omega Gamma Delta Fraternity so bad. There were four fraternities there at that time; Omega was by far the best. When I received my Bid to be a Pledge for Omega, I was so happy and proud.
The first day of joining my Pledge Class, the Brother’s called us “HAUNTS” or “HAUNTEE”, and we had to wear to school a sport jacket, white shirt and tie with big gold handkerchief and a giant safety pin in the outside pocket of the sports jacket. All Haunts had to carry a shoeshine kit, with a tooth brush, and plenty of sticks of chewing gum, to give out to the Omega Brothers and I shinned plenty of shoes for the duration of my Pledge Period.
Every morning each member of my Pledge Class had to meet in the Park in back of the School near the Bridge, to take orders from all the Omega Brother’s. We were Paddled, at times and had to do Push Ups and Jumping Jacks. This was the Omega Hazing process that every Omega Pledge had to endure before reaching “HELL NIGHT” after 6 weeks of being hazed as a Haunt.
HELL NIGHT was really an event I will never forget. All the Brothers’ would line up with their Paddles and Paddle my bare behind until it was rosy red. Some Brother’s had treats for the Haunts to eat such as fried grasshoppers and chocolate covered ants and there were many mind games they would play on us. Then the Brother’s blindfolded us and drove us very far away and dropped us off with no money so we had to get home on our own.
After Hell Night I was admitted as a Brother of Omega Gamma Delta Fraternity. I was initiated into our great Fraternity at a secret ritual meeting and was given my certificate of membership and a membership card; this was a great day for me. I purchased an Omega Sweater and Jacket and wore it proudly.
Every Wednesday, all Brothers of Omega Gamma Delta would wear a Fraternity Sweater with the Omega Emblem and a white shirt and tie to school because it was our meeting night.
My life as a proud member of Omega Gamma Delta Fraternity has made my High School days the best days of my youth. The respect I received from all my friends at school and my teammates in the sports were excellent.
There were three High Schools Valley Stream and they all had Chapters of Omega Gamma Delta. It was a quite a show at all the Football Games to see a flood of Brother’s from all three Chapter’s wearing Omega jackets , giving the handshake and cheering for their team on the sidelines and in the stands. Every place you went on Long Island you would meet Brother’s from different Chapters and have that great feeling that you were part of this great organization.
Alpha Psi Chapter had the best parties, best dances, and great Beach Parties. I enjoyed attending the Grand Chapter or “GC” Meetings each month, and also the Conventions they had every year. My memories of Omega have stayed with me my whole life.
The idea of creating of Men’s Chapters was a great idea and I and everyone in our great Fraternity owe a great gratitude for our wonderful web site (that brought me back to Omega), and the time and effort to keep this Historic Fraternity alive and prosper into the future to the one and only, Exalted Chapter Member Mike D’Apolito.
OMEGA GAMMA DELTA FOREVER,
BROTHER STEPHEN J. CHIARELLO 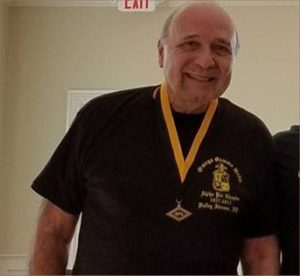