Glancing through the Omega records we noticed that an older alumni Brother lives in Port Orange Florida. So we asked our local Omega Ambassador Bro. Mike Fiumara, Beta Chi ‘70 if he would like to go visit him.  In which he responded “hell yea.”  Brother Karl Jones, Jr. was born August 25, 1920 in the Bay Ridge Section of Brooklyn. He moved to Valley Stream NY in 1924 and became a Charter Member of Alpha Psi Chapter in 1938. He served in the U.S. Army Signal Corps during WW II 1942-1945 in Africa and Italy. He retired after 33 years as a Supervisor from Nassau Medical Center and moved to Florida in 1990. During the visit Bro. Karl surprised Bro. Mike with an Omega paddle that he has had in his possession for over 74 years. Bro. Karl was nice enough to donate the paddle to the Omega archives. 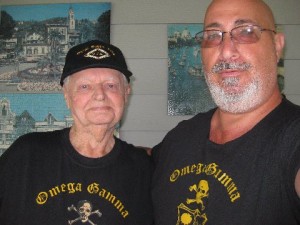